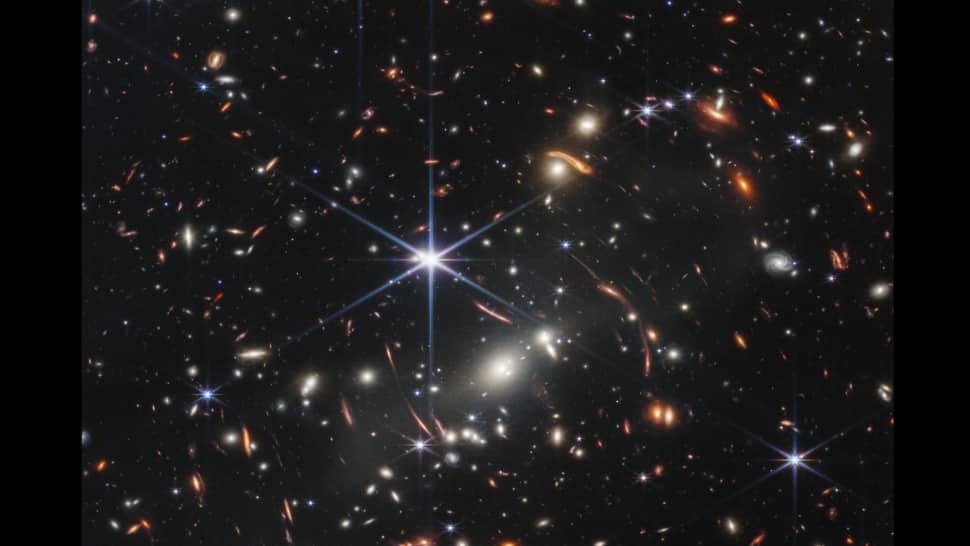 New Delhi: The National Aeronautics and Space Administration (NASA) on Monday (July 11, 2022) released the first picture from its James Webb Space Telescope, an image of a galaxy cluster revealing the most detailed glimpse of the early universe ever seen. The image is the “deepest” and “sharpest” infrared image of the distant universe to date. Thousands of galaxies – including the faintest objects ever observed in the infrared – have appeared in Webb’s view for the first time. Known as Webb’s First Deep Field, the picture of a 4.6 billion-year-old galaxy cluster named SMACS 0723 was released by US President Joe Biden in a preview event at the White House in Washington.

NASA, in partnership with ESA (European Space Agency) and CSA (Canadian Space Agency), will release the full set of Webb’s first full-color images and spectroscopic data during a televised broadcast on Tuesday.

The images on tap for Tuesday include a view of a giant gaseous planet outside our solar system, two images of a nebula where stars are born and die in spectacular beauty, and an update of a classic image of five tightly clustered galaxies that dance around each other.

At least one of the faint, older specs of light appearing in the “background” of the photo – a composite of images of different wavelengths of light – dates back more than 13 billion years, NASA chief Bill Nelson said. That makes it just 800 million years younger than the Big Bang, the theoretical flashpoint that set the expansion of the known universe in motion some 13.8 billion years ago.

“When this image is shared with the world, it will be a historic moment for science and technology, for astronomy and space exploration, for America and all of humanity,” Joe Biden said before James Webb Space Telescope’s picture was unveiled.

“It’s a new window into the history of our universe,” he said.

Join me and Vice President Harris as we receive a briefing from NASA officials and preview the first images from the Webb Space Telescope – the highest-resolution images of the infrared universe ever captured. https://t.co/PbOIyIeXw9

“And today we`re going to get a glimpse of the first light to shine through that window: light from other worlds, orbiting stars far beyond our own. It`s astounding to me,” the US President added.

He was joined at the Old Executive Office Building of the White House complex by US Vice President Kamala Harris, who chairs the US National Space Council.

James Webb Space Telescope, the world’s biggest and most powerful space telescope, rocketed away in December last year from French Guiana in South America. It reached its lookout point 1 million miles (1.6 million kilometers) from Earth in January, following which the lengthy process began to align the mirrors, get the infrared detectors cold enough to operate, and calibrate the science instruments, all protected by a sunshade the size of a tennis court that keeps the telescope cool.

Its objective is to peer back so far that scientists will get a glimpse of the early days of the universe about 13.7 billion years ago and zoom in on closer cosmic objects, even our own solar system, with sharper focus.

It is noteworthy that at 21 feet (6.4 meters), Webb’s gold-plated, flower-shaped mirror is the biggest and most sensitive ever sent into space.