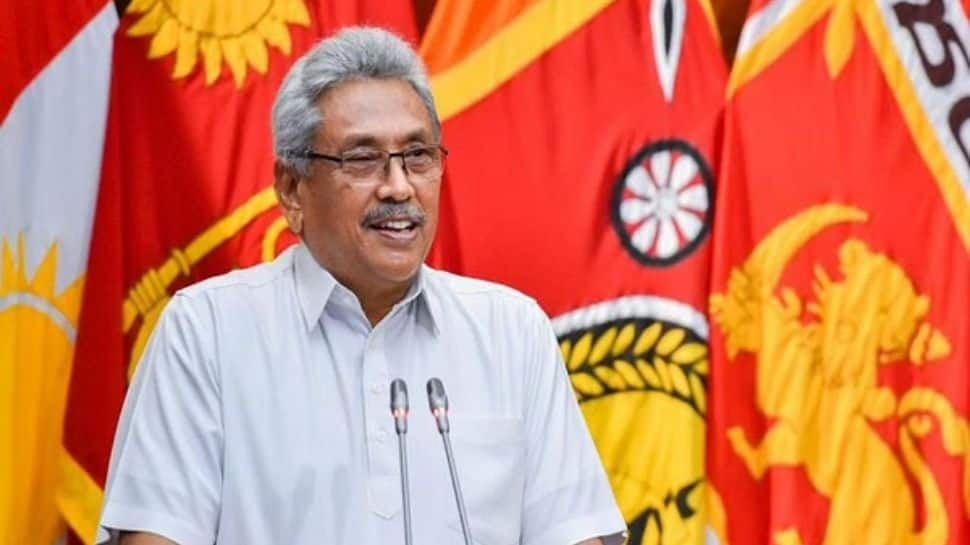 Colombo: Sri Lankan President Gotabaya Rajapaksa on Monday signed his resignation letter dated July 13 which will be handed over to the speaker of Parliament to make a public announcement on Wednesday. The resignation letter of the President was signed and handed over to a senior government official who will hand it over to the Parliament Speaker. Speaker Mahinda Yapa Abeywardena who has been informed of the letter will then make a public announcement tomorrow ending Gotabaya Rajapaksa`s presidency, Daily Mirror reported.

Prime Minister Ranil Wickremesinghe on Wednesday will be sworn in as the President for a temporary period till a new President is elected by Parliament on July 20. Speaker Mahinda Yapa Abeywardena in a statement said party leaders had decided to elect a new President on July 20 through a vote in Parliament in accordance with the provisions of the Constitution.

Nominations for the presidency will be called for on July 19. So far the two confirmed candidates are the Prime Minister and Opposition Leader Sajith Premadasa who yesterday already informed that he is ready to rebuild Sri Lanka`s economy. Sri Lankan President, who announced his resignation on Saturday, was earlier said to have fled and was in a third country.

Speaker of Sri Lanka`s Parliament Mahinda Yapa Abeywardena on Monday clarified that Gotabaya Rajapaksa is still in the country. Sources close to the President confirmed that Rajapaksha was protected by the Armed Forces.

Just before a crowd stormed the president`s residence on July 9, Rajapaksa was evacuated from the President`s House in Fort by the security forces and was protected on a naval vessel within the territorial waters of the country for security reasons.

However, sources close to him said that Rajapaksa physically met commanders of the tri forces yesterday morning at 9.30 am and thereafter remains in the country. His exact whereabouts in the country are unknown but he is likely to leave the country this week, paving way for a new President to be sworn in and an All Party government to be formed.

Earlier, on Saturday, Speaker Mahinda Yapa Abeywardena announced in a press conference that the President will resign from his post on July 13.

Rajapaksa`s resignation comes after thousands of people stormed into the President`s House in Fort on Saturday. The dramatic visuals came from PM`s official residence where they were seen playing carrom board, sleeping on the sofa, enjoying in park premises and preparing food for dinner.

Prime Minister Ranil Wickremesinghe also announced to step down from his posts amid the ongoing protests. However, the protesters who have occupied the residences of the President and Prime Minister have cleared that they will continue to occupy their houses until they resign from their posts.

The worsening economic situation in the country has led to increasing tensions and over the last few weeks, there were reports of several confrontations between individuals and members of the police force and the armed forces at fuel stations where thousands of desperate members of the public have queued for hours and sometimes days.

Sri Lanka is suffering its worst economic crisis since gaining independence in 1948, which comes on the heels of successive waves of COVID-19, threatening to undo years of development progress and severely undermining the country`s ability to achieve the Sustainable Development Goals (SDGs).

New British Prime Minister to be announced on Sept 5; so far 11 in the race to succeed Boris Johnson