Mumbai: Pushpa star Rashmika Mandanna on Monday shared the fun shoot video moments with Tiger Shroff on her social media account. Rashmika took to her Instagram handle and treated her fans with a new fun video. The first time the `Baaghi` actor and south actor will be sharing the screen as they have collaborated for an ad shoot.

Taking to her Insta story, `Bheeshma` actor dropped a boomerang video along with a caption. She wrote, “The rumours were true you guysssssss. lol!! @tigerjackieshroff and I just shot for an ad..Working with Tiger was absolute fire (as she used fire emoticons). Look forward to it.” 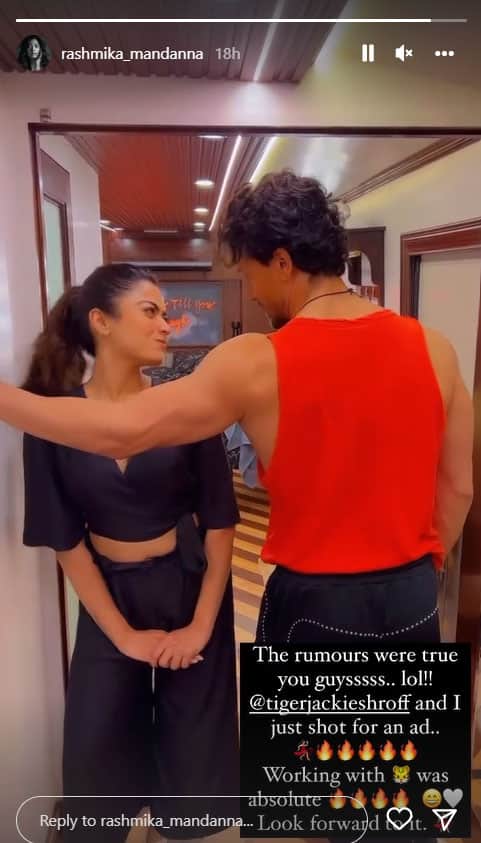 In the video, Rashmika was seen wearing a black co-ord set and kept her hair tied in a ponytail. Whereas Tiger who faced his back towards the camera opted for a red vest that he teamed with black pants.

Further extending the news of their first collaboration, the `Student of the year 2` actor re-shared the video and he wrote, “Haha what a fun shoot! You killed it as always!”Both actors enjoy massive fan-following and are quite active on social media.

Meanwhile, Rashmika’s upcoming movie Sita Ramam first look poster featuring her character Afree was released on the auspicious occasion of Eid-Al-Adha. Directed by Hanu Ragavapudi, the upcoming action romantic film also casts Mrunal Thakur and Sumanth Kumar in the lead roles. Soon after the first look posters of, the `Bheeshma` actor were out, fans swamped the comment section with heart and fire emoticons.

The story of Swapna Dutt`s production film revolves around the characters of Dulquer and Mrunal, who play Ram and Sita, respectively. The romantic drama is against the backdrop of a war.`Sita Ramam` is being made simultaneously in Telugu, Tamil and Malayalam languages.

The film is slated to release on August 5, 2022, in Telugu, Hindi, Tamil and Malayalam. Meanwhile, the `Kirik Party` actor will be also seen in the upcoming Bollywood flix Mission Majnu` alongside Sidharth Malhotra, `Goodbye with Amitabh Bachchan and `Animal` with Ranbir Kapoor.

On the other hand, the `War` actor was last seen in `Heropanti 2` which failed to impress the audience. He will be next seen in `Ganpath: Part 1`, in which he will be collaborating once again with Kriti Sanon. Directed by Vikas Bahl, the project is currently being filmed and is slated to release on the occasion of Christmas 2022.

Apart from that, he also has `Bade Miyan Chote Miyan` with Akshay Kumar, which is slated to release on the occasion of Christmas 2023 and `Rambo`, which will be helmed by the `War` director Sidharth Anand.

EXCLUSIVE: ‘In London, Sara Ali Khan and I eventually landed at KFC’, reveals Karan Johar after being turned down by a restaurant!