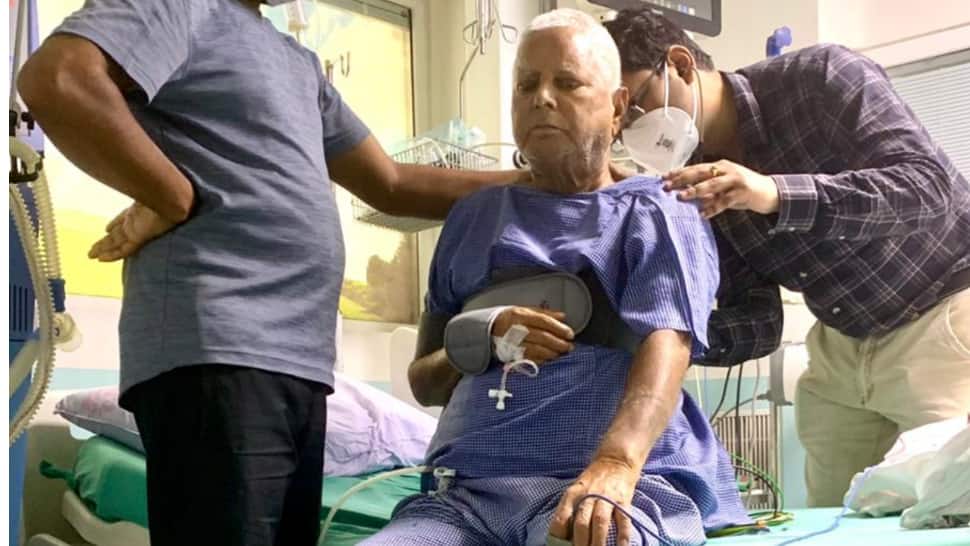 New Delhi: Former Bihar chief minister and RJD chief Lalu Prasad Yadav’s son Tej Pratap Yadav on Tuesday (July 12, 2022) alleged that his father, who is currently admitted to AIIMS Delhi, has been stopped from reciting Bhagavad Gita in the hospital. Sharing his father’s ordeal on Twitter, Tej Pratap said that Lalu loves to read and listen to Gita’s recitation.

“Father was stopped from reciting and listening to Shrimad Bhagavad Gita in the hospital, while father loves to read and listen to Gita recitation,” he tweeted and added that the person who has stopped Lalu from reading the Gita does not know that he will have to “pay the price” of this great sin in this very birth.

Lalu Prasad’s condition has ‘improved a lot’; can sit, stand up with support: Daughter Misa Bharti

The condition of RJD president Lalu Prasad, who is undergoing treatment at AIIMS Delhi after suffering multiple fractures due to a fall, has “improved a lot” and he is able to sit and stand up with support, his daughter Misa Bharti had said last week.

“Respected Shri Lalu Prasad Jim’s health has improved a lot due to your prayers and good medical care of AIIMS Delhi. Now your Lalu Ji is able to sit up on the bed and can stand with support. Who knows the art of coming out from every trouble better than Lalu Prasad Ji,” Bharti said in a tweet in Hindi on July 8.

“Lalu Ji’s condition is much better now because of his willpower and your prayers. Please don’t pay attention to rumours. Keep remembering him in your prayers,” she said.

Lalu Prasad Yadav was admitted to a Patna hospital with multiple fractures due to a fall and was brought to Delhi in an air ambulance on July 6.

Lalu Prasad Yadav is out on bail

Out on bail in fodder scam cases, Prasad had last month obtained permission from the Jharkhand High Court for travelling abroad, preferably Singapore, for a kidney transplant. On whether it would be possible for him to go to Singapore, his son and Leader of the Opposition in the Bihar assembly Tejashwi Yadav had said if in two to four weeks he can undertake international travel, “we may take him to Singapore.”