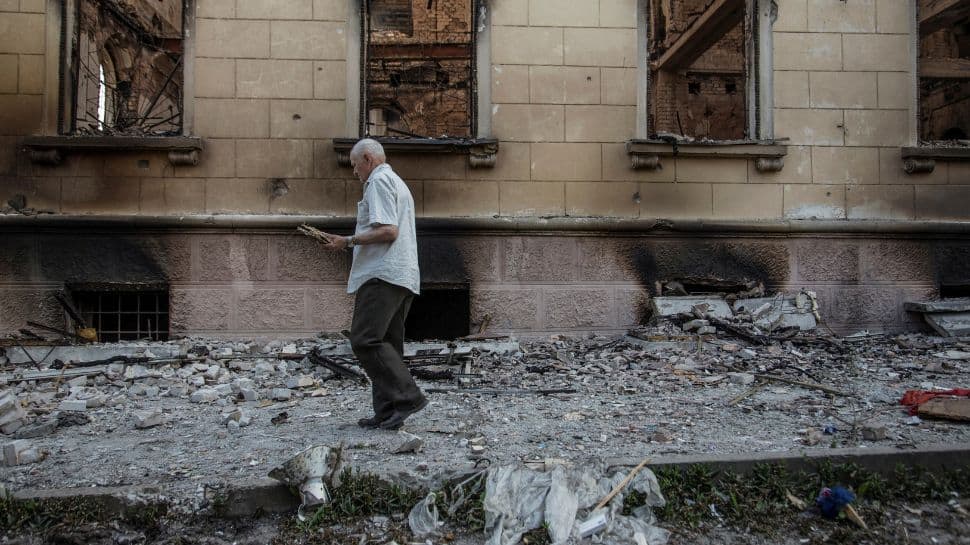 Kyiv: Ukraine remains in control of the Azot chemical plant in Sievierodonetsk where hundreds of civilians are sheltering amid bitter fighting, the region`s governor said on Saturday, after a Russia-backed separatist claimed 300 to 400 Ukrainian fighters were also trapped there.

Earlier, the governor, Serhiy Gaidai, said Russian shelling of the plant in Luhansk province had ignited a big fire after a leak of tonnes of oil.

In neighboring Donetsk province, Russian media reported that a huge cloud of smoke could be seen after an explosion in the city of Avdiivka, which houses another chemical plant.

Weeks of fighting for Sievierodonetsk, a small city in Luhansk that has become the focus of Russia`s advance in eastern Ukraine, has pulverized sections of the town and has been some of the bloodiest since Moscow began its invasion on Feb. 24.

“The information about the blockade of the Azot plant is a lie,” Gaidai said on the Telegram messaging app. “Our forces are holding an industrial zone of Sievierodonetsk and are destroying the Russian army in the town.”

Ukraine has said some 800 people were hiding in several bomb shelters underneath the Azot plant, including about 200 employees and 600 residents of Sievierodonetsk.

Rodion Miroshnik, a Russian-backed representative of the self-proclaimed Luhansk People`s Republic, said late on Saturday that some civilians had started to leave and that Ukrainian forces may be holding several hundred civilians “hostage”.

Earlier, he said 300 to 400 Ukrainian fighters were blockaded on the grounds of the plant along with civilians.

Gaidai said earlier that Russian forces controlled most of the city, although Ukraine controlled the Azot plant.

The Ukrainian armed forces` general staff said on Facebook that Ukrainian forces pushed back a Russian attack on three small towns to the northwest of Sloviansk in Donetsk province, while fighting was continuing in a fourth settlement in the area, as well as to the east of the city.

In a short video address late on Saturday, Ukrainian President Volodymyr Zelenskiy said that while “fierce street fights continue in Sievierodonetsk,” the Ukrainian military was gradually liberating territory further west in the Kherson region and had had some successes in Zaporizhzhia too.

“We are definitely going to prevail in this war that Russia has started,” he told a conference in Singapore via video link earlier in the day. “It is on the battlefields in Ukraine that the future rules of this world are being decided.”

Reuters could not independently verify the battlefield reports.

Ukraine has appealed for swifter deliveries of heavy weapons from the West to turn the tide of the war, saying Russian forces have at least 10 times more artillery pieces.

Ukrainian forces have proven more resilient than expected, but, in a report on Friday, the U.S.-based Institute for the Study of War said that as they use the last of their stocks of Soviet-era weapons and munitions, they will require consistent Western support to transition to new Western supplies and systems.

The institute said effective artillery would “be increasingly decisive in the largely static fighting in eastern Ukraine.”

A German government spokesperson told Reuters they were not able to confirm the report and the Elysee Palace in Paris declined to confirm it. The Italian government did not immediately respond to a request for comment.

None of the three leaders has been to Kyiv since Russia`s invasion. Macron has sought to maintain a dialogue with Russian President Vladimir Putin, a stance some eastern European and Baltic countries see as undermining efforts to push him into negotiations.

European Commission President Ursula von der Leyen told Zelenskiy during a visit to Kyiv on Saturday that the EU executive`s opinion on Ukraine`s request to join the European Union would be ready by the end of next week.

All 27 EU governments would have to agree to grant Ukraine candidate status, after which there would be extensive talks on reforms required before Kyiv could be considered for membership.

Referring to those skeptical about Ukraine`s EU bid, Zelenskiy said keeping Ukraine outside of the bloc would work against Europe. He called his talks with von der Leyen “very fruitful” and added: “there will be many more important and, I hope, fruitful talks with European leaders next week.”

The conflict between Ukraine and Russia, two of the world`s biggest grain exporters, has reverberated well beyond Ukraine.

The United Nations said on Friday up to 19 million more people in the world could face chronic hunger in the next year because of reduced wheat and other food exports.

Ukraine`s deputy agriculture minister said on Saturday up to 300,000 tonnes of grain may have been stored in warehouses in the Black Sea port of Mykolaiv that Kyiv says were destroyed by Russian shelling last weekend.

Turkey has sought a deal so Ukraine can resume shipments from its Black Sea ports, which accounted for 98% of its cereal and oilseed exports before the war. But Moscow says Kyiv must clear the ports of mines and Ukraine says it needs security guarantees so it is not left exposed.

The battle for Sievierodonetsk recalls weeks of bombardment of the southern port city of Mariupol, which was reduced to ruins before Russian forces took control of it last month.

Moscow turned to expanding control in the eastern Donbas region, where pro-Russian separatists had already held a swathe of territory since 2014, after being forced to scale back its initial more sweeping campaign goals.

It calls its actions a “special military operation” to disarm and “denazify” Ukraine. Kyiv and its allies call it an unprovoked war of aggression to capture territory.