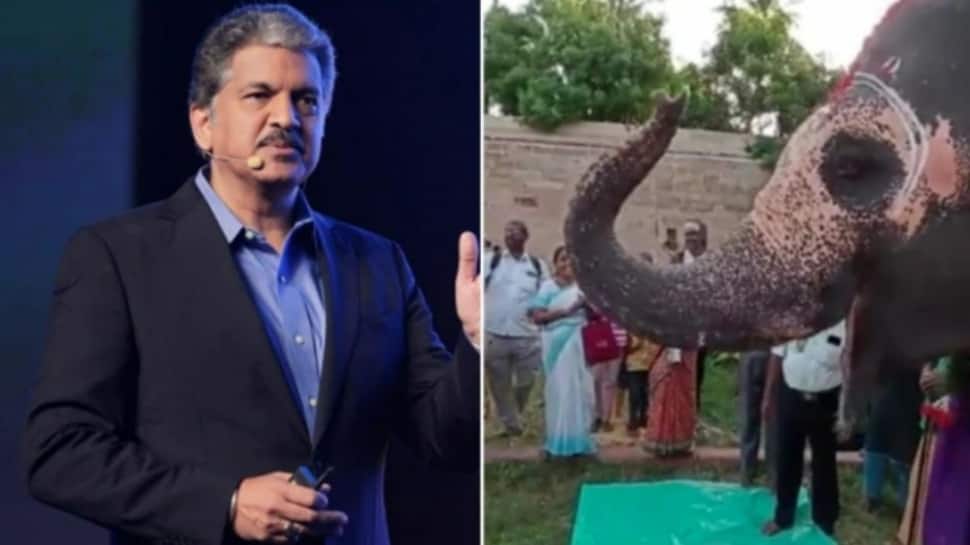 New Delhi: Anand Mahindra is an active user of social media, and his Twitter account is a treasure of funny, inspirational, and thought-provoking remarks that quickly become viral. The Mahindra Group Chairman released a video of an elephant celebrating her birthday on June 10, and we’re sure it will instantly make you smile. The video was shot at the Thiruvanaikaval temple in Tamil Nadu and has nearly 7 lakh views. Even Preity Zinta took notice and shared it on her own Twitter account.

Akhila, an elephant, is shown enjoying her birthday in the now-viral video. She wore garlands and a purple robe and eagerly munched on the fruits that had been spread out for her. While the crowd sang happy birthday and clapped in the background, she can be seen shaking her head with delight. Read More: Chinese firm Tencent buys stake worth Rs 2060 crore in Flipkart from Binny Bansal

“I’m told this clip is from the Thiruvaanaikaval temple (Tamil Nadu) Akhila, the elephant’s birthday celebration. I love her typical desi, sideways shake of the head. And her happiness is infectious. A good clip to watch if you ever need to cheer up,” reads the caption of the post. Read More: Ratan Tata conferred honorary D.Litt by Maharashtra’s HSNC University

After seeing the video, internet users were happy and considered the elephant’s antics to be quite entertaining.

“Luckily, the day before yesterday, I got a chance to meet Akhila. She waved us goodbye. It was a very graceful experience and her happiness was infectious indeed. The temple is also known as Jambukeshwar temple located near Trichy, Tamil Nadu,” a user wrote on Twitter.

Meanwhile, another user commented,”Fantastic. Whenever the taste increases , the elephant shakes its head with happiness like babies. Babies will laugh when we give them some tasty food. A very lovely gesture.”

Bollywood actress Preity Zinta also retweeted the video and called it cool. ‘Wow. This is so cool,” she wrote.